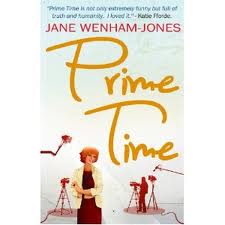 'My new novel Prime Time was inspired by some of the bizarre things I’ve got up to, in the name of publicity for my various books. This has included appearing on a variety of TV programmes which has sometimes been huge fun and sometimes led to me watching the re-run through my fingers…


Keep quiet
Once you’ve been miked up – usually with a power pack attached to your waist somewhere (for this reason it’s useful to wear a skirt/trousers and/or a belt rather than a slinky dress, although all is not lost if do you opt for the latter – it just has to sit on the chair behind you) and a small lapel microphone, make sure it is switched off before you a) say anything rude about the producer/your fellow guests and b) you go to the loo.
Stories abound of entire production crews listening to the sound of the uninitiated having a pee, dealing with their nervous flatulence or discussing their sex lives with whoever’s in the next cubicle.

Check someone’s doing your make-up
They usually are if it’s a magazine / celebrity type programme, and usually won’t be if it’s current-affairs / news job. But this is not set in stone.
I went on something called The Good Day Show on Legal TV, a Sky channel, a few years ago and made an assumption. So I sat around, flicking through magazines, waiting to be called into make-up, only to find time had marched on, and the call was to go straight into the studio.
I knew I was in trouble when I glanced at the monitor to see the young and beautiful American presenter, Tracy Falke appearing to be at least a decade older.
With that lighting, I’d have been struggling if they’d employed their entire cache of concealer but with no time to even get on any slap myself, I realised I’d look about ninety.
"No, you didn't look great, love," confirmed my friend Lyn-Marie Fabes. "Rather tired."
"You looked fine," Hazel, my publisher, declared loyally, adding doubtfully, "though I noticed you weren't wearing any lippy," which I realised translated as: "you were so ancient your mouth had disappeared".


If you’re doing your own make-up, have a steady hand
And take your time. I still have a small eye injury from hastily stabbing myself with a mascara brush before presenting a short film on Margate for The Politics Show back in 2007. By the time filming had finished – it took all day – I could barely keep that eye open and by the next morning it was swollen shut. I had to drive to Brighton to do the voice-over wearing a patch and whining. There is a still from the programme on the internet, showing me scowling, with eyes like slits. Aside from that it was a great experience – even when the locals came out and started yelling at me.'

Laura Meredith never imagined herself appearing on TV, she's too old, too flabby, too downright hormonal, and much too busy holding things together for her son, Stanley, after her husband left her for a younger, thinner replacement. But best friend Charlotte is a determined woman and when Laura is persuaded on to a daytime show to talk about her PMT, everything changes. Suddenly there's a camera crew tracking her every move and Laura finds herself an unlikely star. But as things hot up between her and gorgeous TV director, Cal, they're going downhill elsewhere. While Laura's caught up in a heady whirlwind of beauty treatments, makeovers and glamorous film locations, Charlotte's husband, Roger, is concealing a guilty secret, Stanley's got problems at school, work's piling up, and when Laura turns detective to protect Charlotte's marriage, things go horribly wrong. The champagne's flowing as Laura's prime time TV debut looks set to be a hit. But in every month, there's a "Day Ten" ...

Prime Time is published by Accent Press, and is available from Amazon.co.uk, Amazon.com, Waterstones.com all other good book retailers.


Jane is the author of four novels and two non-fiction books –  Wannabe a Writer? – a humorous look at becoming a scribe – and Wannabe a Writer We’ve Heard Of? a guide to the art of book and self promotion.  As a freelance journalist she has appeared in a wide range of women's magazines and national newspapers and writes regular columns for Woman's Weekly and Writing Magazine, where she is the agony aunt. Jane is an experienced tutor who is regularly booked by writing conferences and literary festivals to run workshops and give talks on all aspects of the writing process. She is also a member of Equity, has presented for the BBC on both TV and radio and has done her fair share of daytime TV, particularly when promoting her controversial second novel Perfect Alibis (subtitled How to have an affair and get away with it...) It was those – sometimes hair-raising – TV experiences that inspired Prime Time, her new novel. For more information see http://www.janewenham-jones.com and http://janewenhamjones.wordpress.com.

You can buy Prime Time here ...


Many thanks to Jane for being here today ...
Posted by HelenMWalters at 10:49

Great post. I love Jane's stories and this book promises to be another success