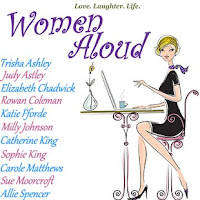 Women Aloud is an audio anthology of short stories written by eleven of the UK's best loved women's fiction writers.

There's something for everyone in this unique audiobook - love, laughter, thrills and chills. It will make a great gift for a friend, mum, sister, grandmother, aunt, girlfriend, wife, partner or...yourself!


I'm thrilled to have one of the contributors to Women Aloud, Rowan Coleman, visiting today to tell us a bit more about the project.

How did you get involved in the Women Aloud Charity Anthology?

I first met Ian, the driving force behind the collection, when he came to be a guest speaker at the creative writing course I teach, and we’ve kept in touch since then. I was delighted when he asked me to contribute a story to the project, I couldn’t think of a more worthwhile cause that I’d like to support.

Tell us about the story you’ve contributed to the project.

My story is called 'In Real Life', it's about a young bride on the morning of her wedding, weighing up the realities of how life has turned out against the way she always imagined it would be. Will she accept what fate as in store for her, or will she run away and keep looking for her dreams?

You’re in some very illustrious company with fellow writers Katie Fforde and Sophie King among others, has that made it an interesting and fun project to work on?

Most of the other writers involved are friends of mine, I’ve known Katie for ten years, and Sophie and I lived very close together until recently. What was really nice was that I was able to bring quite a few writers in on the anthology, including Trisha Ashley, Milly Johnson, Allie Spencer and Carole Mathews, who were all really willing to help.

What do you think makes a perfect mix of stories for an anthology?

We weren’t given a brief when it came to contributing a story and so I think Women Aloud has the perfect mix, there is something here for everyone. Some pure romance, some comedy, plenty of drama and one or two tales of the unexpected. Every story is unique and different from the last.

What particularly appealed to you about supporting the Helena Kennedy Foundation?

The Helena Kennedy Foundation offers financial support to disadvantaged young people, who are desperate to learn and change their lives, but who don’t have the financial or family support to do that. At the launch of the anthology we heard from a young woman who was abandoned by her mother and taken into care as a child, discovered she was pregnant at 13 and then had to give that baby up for adoption. For many young people that would have been the end of hope, but this young woman wasn’t ready to give up on herself, and crucially The Helen Kennedy Foundation was there to make sure that she got a second chance. She is now in her second year at university, a confident and articulate young woman. And if writing a short story helps in some small way, to give the same second chance to other young people then who wouldn’t want to be involved?

The anthology is unusual as it’s an audiobook. How did you feel about hearing your work being read aloud?

It’s a little strange, I’ve had many of my other books turned into audio books, and the way an actress reads them is never quite how you imagine it in your head! But the actress who reads my story, Elizabeth Bower, really nailed it, she was perfect!

And what added dimension to the stories do you think people who buy the anthology will find through listening to them being read out?

Well the added advantage is that you can listen to great fiction while you’re on the train or bus, or in the garden or walking the dog. But also its lovely to hear the stories being truly brought to life, like mini radio plays.

You’ve also got a novel out at the moment, ‘Lessons in Laughing Out Loud’, tell us a bit about that.

'Lessons in Laughing Out Loud' is the story of Willow, one of a pair of identical twins whose life has taken a vastly different direction from that of her sister's. Single, divorced, married to her job and living alone, a terrible secret from Willow’s childhood continues to prevent her from finding happiness or love. But when someone from her past turns up on her doorstep, Willow knows that now is the time she must face her past, or risk living with her demons forever.

As a novelist, what’s the biggest challenge about writing a short story?

Not having 100,000 words to play with! Short story writing is an art and a great discipline for a novelist, it reminds you the importance of structure, planning pacing and craft.

What are you working on next?

I’m working on completing my next full length novel 'Dearest Rose', which should be out next summer.

Thanks so much to Rowan for those fabulous answers. You can find out more about Rowan and her books on her website.

I'll be reviewing the Women Aloud anthology on Bookersatz soon, so please keep your eyes open for that.

In the meantime you can read my review of 'Lessons In Laughing Out Loud' by Rowan Coleman here.

I'm also thrilled to have a guest review on Bookersatz from the lovely Shirley Wells at the moment. Shirley has reviewed 'The Hanging Shed' by Gordon Ferris.

You can find out more about Shirley on her blog here and her website here, and you can read my review of her book fabulous current book 'Dead Silent' here.
Posted by HelenMWalters at 11:49

The audiobook sounds great, and for a good cause too. I'm off to download a copy :o)

I've become addicted to listening to audio books while I'm driving, but the narrator can make or break a story!