It's Halloween - and what could be better than curling up with a supernatural romantic comedy!

I've posted a review of Heaven Can Wait on Bookersatz - so zoom over on your broomstick to find out what I thought about it.

And if you haven't already bought a copy - today's the day! 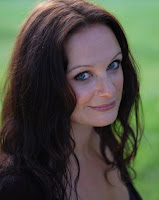 The wonderful Cally Taylor has a new novel out at the moment. It’s called Heaven Can Wait and is available in the shops and also via Amazon – there’s a link in my side bar if you want to make it really easy for yourself!

I read a review copy of Heaven Can Wait a while ago and absolutely loved it. I’ll be posting a review of it on Bookersatz in the next few days, but meanwhile Cally popped over and was kind enough to answer some slightly strange questions put to her by the cats. Trust me, David Dimbleby has nothing on this lot.

Tabitha said: So, Cally, we’re cats and we can’t actually read – but Mummy tells us that lots of her blog readers will be interested in hearing about your new novel. Tell us what it’s all about ?

Hello cats, lovely to meet you. Please don’t think I’m rude for not shaking your paws, I’m allergic to you! If it’s okay I’ll just stand here while you rub around my legs, looking confused.

Anyway, yes, my novel. It’s called “Heaven Can Wait” and it’s about a woman called Lucy Brown who dies the night before her wedding. She ends up in Limbo with a very nice saint called Saint Bob (who looks a lot like Bob Hoskins). Saint Bob gives Lucy the choice – she can either go up to heaven to see her parents or return to earth as a ghost to be with her fiancé Dan. But there’s a catch! If Lucy wants to be reunited with Dan she has to find love for a total stranger in twenty-one days. And if that’s not bad enough she soon discovers that her ex-best-friend Anna is making a move on Dan...

Jasper added: If we could read, we’d definitely read your book. What do you think we – or your human readers – would particularly like about it?

It’s a light-hearted, romantic book with a mixture of laugh-out-loud (hopefully) scenes and more poignant moments that have been known to make people cry. Most people who’ve read the book have sped through it in hours – even people who claim they ‘don’t read fiction’ (I know cats, shocking isn’t it!) – so it’s perfect for anyone who doesn’t want a heavy, weighty read and fancies being entertained for a few hours instead.

Cookie Crumble had another question: We know a fair bit about the supernatural, being cats, why did you choose this as your theme?

I didn’t make an active decision to write a supernatural novel – the idea just came to me and I had to write it! I do love all things supernatural though. I’m a big fan of TV programmes like Buffy, Angel, Heroes and True Blood and films like Ghost and Just Like Heaven and I think being fascinated by your subject matter helps motivate you when you’re writing a novel.

Minty wondered: What do you like best – tuna or sardines?

I like both of them but tuna is definitely my favourite. Tuna mayo on a jacket potato. Yum!

Minty added: Mmmm, we’re not so sure about potatoes, but tuna is a good decision.

Are there any cats in Heaven Can Wait? Tabitha was eager to know.

There’s one on the cover which is a bit weird because there isn’t actually a cat in Lucy and Dan’s house or in the House of Wannabe Ghosts! Maybe it’s a wannabe ghost cat? I do mention Lucy’s Mum and Dad’s cat but it doesn’t get a starring role I’m afraid.

We understand that you’re writing a new novel now. Does that have any cats in it? What does it have in it?

Nope, there are no cats in my second novel. Oh no – now I’m worrying there aren’t enough cats in my novels! The second novel has guardian angels in it but they don’t have wings so you probably wouldn’t want to catch them and bring them into the house as a gift for your Mummy. They’re pretty rubbish guardian angels too and keep messing things up for the people they’re supposed to be helping.

According to Mummy, your neighbour has cats. Are they as cute as us?

Mummy’s right! My neighbour has two cats I like to call Angel and Devil. Devil is mottled in colour and really skittish. After he moved in he decided that his favourite place to wee was behind the front door. That was a bit smelly and inconvenient, particularly when I went to answer the door to the postman in my bare feet and didn’t notice the puddle! Luckily he’s stopped now but he’s still very scared of people and gives me evil looks when he sees me in the hallway.
Devil’s brother Angel is a ginger cat with psychic ability (or just very good hearing). Whenever I go into the garden Angel comes to join me. He’s a very friendly cat and likes lots of attention and stroking. I have been known to stroke him and to hell with my allergy!


Jasper said: Don’t worry chaps, they definitely don’t sound as cute as us.

Minty had another question: Would you ever consider writing a novel that was just about cats?

Actually that makes purrfect sense to us, Cookie said.

We hope that all of Mummy’s blog readers will go out and buy your novel now. You seem very nice, would you like to come out catching mice with us some time?

Thank you very much for calling me nice. That’s very sweet of you. I’d love to go mice catching with you, but I’m not carrying them home in my mouth.

Tabitha said: On behalf of all of us cats, I’d just like to thank Cally for visiting our blog and answering all our incisive questions. 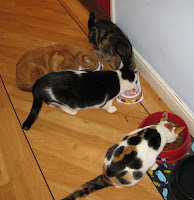 And this is a photo of us eating our dinner. We really are exceptionally cute aren't we?
Posted by HelenMWalters at 21:15 12 comments:

But you don't have to any more.

I read it a while ago, and I can tell you - it's absolutely brilliant. Touching, warm, funny and believable.

I'll be doing a proper review for Bookersatz soon, but meanwhile, you don't need to know what I think! Read it yourselves. I've even put an Amazon link in my sidebar to make it easy for you.

Cally will be on this very blog next week being interviewed by my cats, so please don't miss that. They'll be talking about fish, catching mice and possibly even Cally's novel.

You can also pop over to Cally's website to find out about an amazing competition she's running to coincide with the launch.

Cally's blog was one of the first writing blogs that I started to read when I started writing and set up this blog. Now, I'm just so, so pleased for her today and so proud to know her and (to be honest) a bit emotional. Cally - congratulations you total star!
Posted by HelenMWalters at 17:57 7 comments: