The Bone Mill by Nicholas Corder

I've put a new review on Bookersatz today. It is of 'The Bone Mill' by Nicholas Corder, a book which I absolutely loved.

For those who don't know, Nick is also a great writing tutor and has written a number of non-fiction books. He also teaches the ukelele - don't ask! You can find out more about him on his website.

I am still looking for new reviewers for Bookersatz, so if you've read a book you loved recently and you want to tell the world about it, please get in touch.
Posted by HelenMWalters at 13:06 4 comments:

The Tapestry Of Love 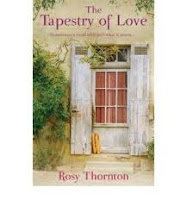 There is a new review on Bookersatz. It is of 'The Tapestry Of Love' by Rosy Thornton. I loved this book!
Posted by HelenMWalters at 22:02 4 comments:

The prolific and very hard-working Adrian Magson has not one, but two, books coming out in the near future. So I'm really pleased he's found time to pop over to my blog for a chat about his writing. I asked him about his latest release.

Tell us about your new book ‘Red Station’.

‘Red Station’ is a contemporary spy thriller, and the first in a series featuring MI5 officer Harry Tate. It’s based on the ‘what if?’ principle. In this case, what if an MI5 officer (Tate) is caught up in a drugs intercept which goes badly wrong, resulting in the deaths of two civilians? Sent to a remote Intelligence outstation overseas to avoid close press scrutiny, especially in the wake of the Jean Charles de Menezes shooting in Stockwell, he discovers that not only is he right in the path of the Russian army, who are about to cross the border (with S. Ossetia) in support of a satellite state, but that he has been sent to a punishment posting for washed-out spooks, and set up for assassination by a government hit squad. Essentially, it’s about a man who, as a former soldier and a loyal government servant, decides that obeying orders has its limits, and betrayal means he has to fight back to survive.

It’s obviously a busy time for you as you have another book coming out later in the year as well. What’s that one about?

A little different, this one. It’s called ‘Death on the Marais’ and is the first of a separate series set in France in the 1960s, and featuring Inspector Lucas Rocco of the French police. As part of a nationwide policing initiative to spread investigators more evenly around the country, Rocco is taken from his normal anti-gang duties in Paris, and sent to Picardie in the rural north. There he finds that not only is the supposedly serene countryside alive with danger (such as locals who hit old WW1 and WW2 ammunition with hammers to recycle the brass and lead), but that there are strong echoes of the war, the Resistance and SOE (Special Operations Executive), which people in positions of power do not want looked into, even when a young woman is found murdered in a military cemetery. It’s a man’s fight against official obstruction, corruption, murder… and suddenly finding himself out of his normal comfort zone where city rules don’t apply.

Prior to this you wrote a series of books featuring recurring characters Riley Gavin and Frank Palmer, have you retired those characters or will they be making a reappearance?

Let’s say they’re in storage at the moment. I had written five books in the series, and basically got to a point where I wanted to write something very different – a spy thriller. This turned out to be ‘Red Station’. Then, while working on its sequel (‘Tracers’ – out Feb 2011), I had this idea for a French-based cop series and wrote ‘Death on the Marais’. I was partly educated (some would say only ever partly) in France, so know the area and people, and it goes back to writing about what you know. Hopefully anyone who knew me there will have moved on and won’t suddenly see themselves in the book. They won’t, I promise!

What sort of characters do you like to create most – goodies or baddies?

Baddies are definitely more fun to write about. I believe actors say they’re much more fun to play for the same reasons – you can enjoy their extremes. As a writer, you also get to knock them off if they get too nasty. But you can’t have a book with too heavy a balance on the dark side, so you have to counter the bad with the good (or maybe, the not-quite-so-bad if your central character is an anti-hero). The thing about the goodies is that if you’re writing a series, you have to give them enough colour to make them interesting, rather than cardboard cut-out ‘white hats’. The baddies come and go (sometimes more than once, as will happen in the Harry Tate books), but the goodies remain central, and have to retain the readers’ sympathies and interest, and have light and shade of their own.

Somehow you also find time to write short stories and articles about writing, do you find it inspiring to have a range of different writing tasks on the go at all times?

Yes. I’ve always enjoyed writing different things of different lengths, purely because it’s a relief to change pace occasionally. I don’t mean that short fiction or features are easier; telling a short story in 2,500 words or so can be enough to make your teeth bleed, whereas having 90,000 words to develop characters and scenes is a luxury. But with a short piece you can see the end – it has a deadline. With a book, the end is out of sight. It’s a bit like the difference between a short stroll and thirty-mile hike.

Writing shorts is also a great proving ground for writers. It teaches you pace, characterisation, economy of words and, especially, writing for a market. In other words, discipline, which is all necessary for writing a novel.

Finish the novel first. Then find an agent. Most publishers like to go via agents, although there are a few out there who don’t. Why finish it first? Because in spite of the very rare occasions that you hear of someone getting a publishing deal from a scribbled sentence on the back of a fag packet, what would you do if you showed the first three (and maybe only) chapters to an agent, who said – “Great! Where’s the rest?” By the time you’d finished it, they might have moved on and lost interest (and believe me, there’s always another submission waiting). You’d be gutted. The other points are, have a good opening line (it might be the first and only line they read), and don’t waffle. Get to the point of the story. You want to draw them in, not put them off. And make sure your layout is as professional as you can make it. Presentation still counts.

Oh, and start writing the next one. The only things sitting on laurels should be insects.

What gives you most pleasure out of all the things you’ve achieved so far in your writing career?

Always having something new published. I wanted to write for publication, right from an early age, but it was never a once-only ambition. I can remember the sense of achievement when I had my first story published, and I get that same feeling every time. Writing is writing, and a lot of effort goes into it, as you know. It doesn’t matter whether it’s a book or a short piece, it’s still a buzz to achieve publication. Okay… maybe seeing my books on the shelves is a bit more special… !

What are your writing plans for the future?

I’ve finished the second Harry Tate thriller and am currently working on the second Lucas Rocco book, both due out next year. Then, if the readers and publishers want more, I’ll be working on numbers 3 of each. In between I’ll continue to write short stories and articles. After that – who knows? One thing’s for sure, I’ll be writing something.

Huge thanks to Adrian for joining us today and sharing some interesting thoughts on writing.

You can buy 'Red Station' here, and pre-order 'Death On The Marais' here.
Posted by HelenMWalters at 10:37 13 comments:

I am very happy to be part of the blog tour for D J Kirkby’s new novel, ‘Without Alice’. If you’ve never visited DJ’s blog Chez Aspie, can I recommend that you do?

You’ll find my review of ‘Without Alice’ over on Bookersatz.

Although this is DJ’s first novel, she has also had a memoir, ‘From Zaftig To Aspie’, published and you can read a review of that on Bookersatz as well.

There are competition and event details at the top of DJ’s blog, just follow the links.

The next leg of the blog tour will be at Talli Roland’s wonderful blog
on Monday 16th August. So don’t miss that.

I am hugely thrilled for DJ on the publication of her novel and wish her all the best of success with it.
Posted by HelenMWalters at 22:48 6 comments:

Dance Your Way To Psychic Sex 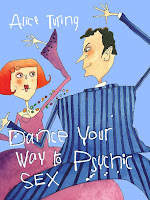 Please pop over to Bookersatz for news of a very exciting new book. ‘Dance Your Way To Psychic Sex’ by Alice Turing is being published in a daring and innovative way. You can read more about it here.

I was lucky enough to get the chance to read an advance copy, and it’s a fabulous read.

Also, coming up on this blog, I’ll be taking part in the blog tour for D J Kirkby’s new book ‘Without Alice’. That’s coming up on 12 August.

And finally, I've got a very exciting author interview coming up on this blog later in the month, so please look out for that.
Posted by HelenMWalters at 09:23 12 comments: