Being Brooke Simmons by Karen Clarke 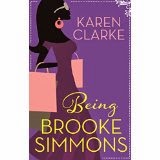 This novel has a great, unusual premise which is also executed really well.

Brooke Simmons is in a coma, but somehow due to her sheer strength of will she manages to inhabit Abby Archer's body. It turns out that Brooke has lots of unfinished business and she doesn't want the mere fact that she's in a coma to stop her from resolving it.

At Brooke's insistence, Abby keeps an eye on Nick - the man Brooke is hoping to marry. What secrets was he keeping from Brooke just before the accident that caused her coma? Was he being unfaithful to her, or was there a deeper and darker secret to hide?

Along the way, the irrepressible Brooke encourages Abby to face up to her own problems. Abby has a dysfunctional family who all rely on her far too much and her love life is going nowhere. Brooke's interventions in Abby's love life give the book some of its greatest comic moments.

This is a romantic comedy that positively zings along, but it's also a bit more than that. The device of having Brooke inhabit Abby's body gives a unique twist to the story, but the other thing that lifted it out of the ordinary is the relationship between Brooke and Abby. Both women have a romantic interest to pursue in the course of the story, but it is the development of their relationship with each other which is, in the end, the most touching.

I loved this book and would recommend it to all lovers of romantic comedy.
Posted by HelenMWalters at 12:56 1 comment:

Love and Fallout by Kathryn Simmonds

This book has a great premise. We first meet Tessa in the present. She's struggling with her life on a number of fronts. Things aren't going well in her marriage, her relationship with her daughter is distant and she's not sure that she can keep the charity she works for afloat.

A combination of events, starting with a chance meeting in a swimming pool, start Tessa off on a trip down memory lane to  a very different time in her life. Because, when Tessa was a young woman she lived as part of a very different family - a group of women at one of the camps at Greenham Common.

I didn't know a huge amount about Greenham Common when I started to read this book, but I found the story very vivid and informative. Kathryn Simmonds has obviously done her research, but it is written with a gentle touch and never feels like the historical facts are being forced into the story in any way.

The story is beautifully written in both strands with believable characters and events. The fact that the reader can see the young Tessa reflected in the older one adds to the richness of the story.

Eventually the two strands collide when present day Tessa is contacted by a face from the past. Angela was the person at the camp who she got on with the least well, so does she really want to meet up with her again? In the end, Angela's reappearance in her life affects Tessa in more ways than she could possibly have expected.

I really enjoyed this book, and I recommend it to anyone who enjoys women's fiction with an additional dimension to it. So skilful is the recreation of the Greenham Common experience that towards the end of the book I found myself thinking that next time I saw footage of Greenham Common on the television I'd have to look out and see if I could spot Tessa, or Angela, or Jean or one of the other residents of Amber gate.

I think this book will stay with me, not least because the final paragraph is so poignant it made me catch my breath and hold back tears.

Thanks very much to the author for a review copy of this book.

Posted by HelenMWalters at 13:42 No comments:


A guest review from Lady Techie.


I took my time with this one because I knew as soon as I started it that I would like the protagonist and love the story. Discern is the first book in a new series about Nicole Williams who is a fourth child in her family which makes her what is called an Arete or magical. I found that premise very interesting as the family dynamics and relationships were displayed for multiple students in Nicole's school in Seattle, Katon University. It has to be a strain on parents that want to fit in knowing that having a fourth child would allow them to produce a magical child, as well as a strain on the children that come before that fourth child knowing that they missed out on something special due to not being the fourth child. Sibling relationships are difficult enough but this seems like it would create a sibling rivalry that would be hard to manage, especially for the one child that is different. Also, what if the parents are not fourth children? Nicole was a product of just a family. I picked up on her having brothers and so far we only meet her mother so I am looking forward to meeting her entire family. After we meet Nicole's mother we are left with a huge desire to know the history of her family.


Katon University is a specialized university designed for Arete students. It teaches not only traditional subjects like math, science, but also subjects that relate to magic like magical objects. Each Arete's gifts typically are related to one of the elements, earth, air, fire or water, but there are so many things in between that makes this story exciting. Nicole starts at Katon with her best friend Lizzie, who is also her roommate at an apartment that leaves a lot to be desired. There are some interesting neighbors and their apartment can be truly weird and horrifying but it just adds to action in this story. Nicole applies to go on an expedition in the desert to try and help determine why people are disappearing when they visit that part of the desert. It is suspected that it is magic related so her professor is one of two professors hosting the expedition and boy is that trip action-packed. Nicole learns a lot about herself, her classmates that also are on the expedition, and other Aretes that are part of the expedition.

Discern is a strong, exciting, action-packed start to the Katon University series. The world building was really well done. The character development gives the readers some really great characters to love, dislike and also some that leave us on the fence waiting to see who they become as the series unfolds. I am really looking forward to see where it goes next and I really look forward to hopefully a book dedicated to Nicole's life before Katon University.

Posted by HelenMWalters at 16:13 No comments:

This is what the publishers have to say about the book:
London at the dawn of 1918 and Ireland’s most famous literary figure, WB Yeats, is immersed in supernatural investigations at his Bloomsbury rooms.
Haunted by the restless spirit of an Irish girl whose body is mysteriously washed ashore in a coffin, Yeats undertakes a perilous journey back to Ireland with his apprentice ghost-catcher Charles Adams to piece together the killer’s identity.
Surrounded by spies, occultists and Irish rebels, the two are led on a gripping journey along Ireland’s wild Atlantic coast, through the ruins of its abandoned estates, and into its darkest, most haunted corners.
Falling under the spell of dark forces, Yeats and his ghost-catcher come dangerously close to crossing the invisible line that divides the living from the dead.

This book has a lot going on and certainly made for a roller coaster read. It's an intriguing idea. Part detective story, part supernatural and part historical it has a number of layers and threads which have been woven together by the author into a very unusual whole.

It starts with a tableau that introduces many of the themes that will run through the book. A body of a young woman has been washed up by the sea into a cove off an Irish beach. But who is she, and why is she in a years old coffin?

Dead bodies, ghosts, rebels, smugglers and the sea all loom large throughout the narrative, drawing the different strands of the story together and creating an overarching atmosphere. It is the atmosphere that lingers more than anything when you put the book down.

The story is in part a detective story, but with a difference. Our detective, Charles Adams, has been tasked with the job of finding out who killed Rosemary O'Grady by the poet W B Yeats. The presence of Yeats and other historical figures - Maud Gonne and Winston Churchill, to name but two - gives the story an added depth and I found this aspect of it very interesting.

The story is set during the First World War and just after the Easter Rising, and it makes the most of its historical setting, using wider world events as a backdrop to the action of the story. Because of all the other things going on - Irish rebellion, smuggling, occultism - the solving of the murder is never going to be easy. Charles Adams is led on a series of adventures before he gets anywhere near the truth, and encounters all sort of perils on the way.

I enjoyed the glimpses into the home life of Yeats and his wife that are threaded through the book, and his depiction by the author is very effective. I also found the threading together of this strand with the occult, and with the death of Rosemary O' Grady intriguing. In addition to the strong characters and intriguing plot, The sea, and Ireland itself, are also stars of this book.

Overall an entertaining read for anyone who wants a detective story with a difference.

Thanks very much to the publishers for a copy of this book. You can find out more here.

Anthony Quinn is an Irish writer and journalist whose first novel Disappeared was acclaimed by the Daily Mail as 'unquestionably one of the crime novels of the year, written in peerless prose.’ It was shortlisted for a Strand Literary Award by the book critics of the Guardian, LA Times, Washington Post, San Francisco Chronicle and other US newspapers. It was also listed by Kirkus Reviews as one of the top ten thrillers of 2012. His short stories have twice been shortlisted for a Hennessy/New Irish Writing award.
The Blood-Dimmed Tide is the first in a series of three historical novels set in Ireland during WWI and the War of Independence. He lives in County Tyrone, Northern Ireland.