When Jonas Brand finds himself on a train from Zurich to Basel from which a stock trader appears to have thrown himself to his death, he gets caught up in a series of events that will ultimately place him in grave danger. Jonas is a film maker. He is mainly engaged in making short pieces for a celebrity lifestyle channel, but he wants more. He wants to pursue serious investigatory journalism, and also make his own film.

So when, having temporarily shelved the material on the train incident, he finds himself investigating what looks like a case of banking fraud he sees it as a chance to take his work more seriously.

He is helped by a colleague Max, a widower who has let his life go off the rails since his wife died, who urges him to follow up his investigation into bank notes with identical serial numbers. Max’s knowledge of banking tells him there is something serious going on and he helps Jonas find out more. But their joint interest in the case leads them both into danger.

I found this thriller interesting in that it gave glimpses into the worlds of both banking and film making and introduced some intriguing characters, of which Max was probably my favourite.

The plot is complex and involved and I found it a real page turner. The ending was somewhat low key for a thriller, but it left me thinking which I always think is a good thing in a book.

I recommend this book to thriller lovers.

Montecristo was translated into English by Jamie Bulloch.

Posted by HelenMWalters at 15:19 No comments:

My Husband’s Wife by Jane Corry

My Husband’s Wife is a very complex story, and it is also very much a story of two distinct halves. The second half revisits the characters of the first half, but picks up their stories fifteen years later.

The book starts with newly-weds Lily and Ed. We know they are having problems in their marriage, and that there is something Lily should be telling her husband and isn’t. But we don’t know what. We also meet their neighbours, Francesca and her young daughter Carla. Their story is told from Carla’s point of view, firstly as a child and then later as an adult.

The first half spends a lot of time setting up the various characters and scenarios and at times it can feel a little slow moving, but it is well worth bearing with it. Trust me – you do need to know all this!

It is then in the second half that the story starts to really take off as it chases towards its dramatic climax. All the secrets and lies of the past come together to set the stage for a mighty battle of the characters towards the finish.

One of the interesting things about this book is that most of the characters are pretty unlikeable. They are selfish, they lie to each other and scheme to get their own way. And yet, Jane Corry has pulled off the clever trick of getting the reader interested in them and invested in their stories despite this.

Part of the complexity of the story is the way in which it deals with moral issues. Right and wrong, justice and injustice, truth and lies. As the story goes on we find out more and more about the characters’ motives and their inner lives and the layers of secrecy are peeled away to reveal what is really going on.

Fast moving, gripping and emotional. I recommend this to anyone who likes a thriller with real depth to the characters.

This book is available as an ebook now, and will be released in paperback on 25th August.

You can find out more here

Posted by HelenMWalters at 11:49 No comments:

Great news! Until 6pm tomorrow (UK time) Late Checkout is on special offer for a mere 99p! Get it while you can.


We also, for today only, have Murrain's Truth on FREE offer. So, if you love a bargain, why not scoot over to Amazon and get both!

You can buy Late Checkout here.

And you can download Murrain's Truth for free (today only) here.

If you read and enjoy them, we'd really appreciate a brief Amazon review!

Posted by HelenMWalters at 11:14 No comments:

Thanks to everyone who dropped by over the weekend to read our posts about Late Checkout and to enter the two competitions!

The winner of the competition for the story about the best mishap in a hotel is Awen, with this gem.

'We went to a hotel in Malta two years ago. It had a balcony with sliding patio doors. One evening I was sitting on the balcony with my Ipad writing, husband asked if I'd like a glass of wine (silly question) As he brought the two glasses of wine out, he closed the door with his elbow, to keep the insects out of the room... and locked us out. We couldn't climb over to anyone else's balcony to knock on their door to tell reception. There wasn't any one around to shout below, and to make matters worse, we'd put the bolt on the main door too. Neither had our phones to phone the hotel reception. I tried emailing the hotel reception... no reply. After a while I had the idea to use the SMSmessage app on my Ipad to message my son's Iphone! Husband despaired as son never answers his phone! I text,' Are you around?' Obviously his mum asking a weird question from Malta got him worried, I got an almost instant reply. "Yeah, you ok?" I explained we were trapped on our hotel balcony, dad had shut the door behind him and it locked, and needed him to phone Hotel reception and ask them to rescue us, although the bolt was also on the room door." Reply? "Ha ha ha ha ha ha ha ha ha ha ha!!" He did phone them and sent a message that the porter would rescue us soon. After another 30 minutes we could see the handle being wiggled then a knife blade working on the door frame and lock and another 15 minutes later the porter opened the door. We were very pleased to see him as there were loads of biting insects gathering near my bare arms and legs. Apparently, he carries his trusty penknife around with him, as we were not the first people to get locked out. We were so grateful, but he wouldn't take a reward ! After that we threw a towel in the door way to stop it closing.'

There were some other great contenders though, so do have a look at the comments on the competition post as well.

The winner of the competition to share the most interesting thing about your home town, which took place on the Alex Walters blog, was Mandy with this spooky offering.

'I live in Hitchin in Hertfordshire. There was a road in Hitchin that was once called Dead Street, because not a single person living there survived the plague of 1665. More cheerfully, the first translator of Homer, George Chapman, who was believed to be the rival poet in Shakespeare’s sonnets, was born and brought up here. The house is said to be now extremely haunted.'

Congratulations to both winners. I will be in touch in the next couple of days to ask for your addresses so that I can send you your signed books!

And you can read a sample for free here. 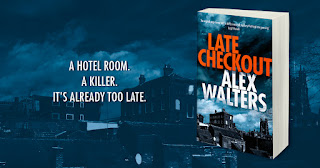 Posted by HelenMWalters at 11:36 2 comments:

To celebrate the publication of 'Late Checkout' today we have, not one, but two book giveaways for you.

We're giving you two chances to win signed paperbacks of the first two novels by Alex Walters, 'Trust No One' and 'Nowhere To Hide'.

On this blog post I just want you to leave a comment telling me about your oddest or most humorous experience of staying in a hotel. Anything from fire alarms going off in the middle of the night, to locking yourself out of your room in your pyjamas!

You've got until the end of Sunday and we will pick a winner on Monday morning.

On Alex's blog there is a separate competition where we are looking for the most obscure or interesting fact about your home town. You can find the blog post here.

You can buy 'Late Checkout' here.

We are also having a Thunderclap to publicise the book on 14 June. For anyone who doesn't know what this is, it's just a way of getting as many mentions of the book on social media as possible at the same time in order to give the book a boost. It only takes a couple of clicks and just means that you're allowing your FB and/or Twitter to put up a one off promotional post. If you're willing to help, you can sign up here.