100 Ways To Fight The Flab by Jane Wenham-Jones 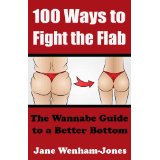 
We all get writers' bottom from time to time, don't we? Let's face it, any profession that involves spending most of your time sitting on said bottom whilst cramming your face with cake/chocolate/crisps/wine* is almost bound to result in a few ballast-related problems isn't it? *delete as applicable* *or not

But you can stop worrying. Jane Wenham-Jones has the answer. This book is not just a diet book. This is a diet book that will make you laugh. And we all know that laughing uses up calories. So that's good.

Jane's tips range from the sensible (eat little and often, use a pedometer to make sure you're moving enough) to the marvellously frivolous (pretend you weigh much more than you do). Jane also explains the stroke of genius which is the 'shelf' diet. You'll need to buy the book to find out what that is and how it works.

I won't be able to take up the bewildering array of fitness techniques including stairs which Jane outlines, as unfortunately I live in a bungalow. However, I will be taking her advice on all the other things I might be able to do in order to make my bottom a tiny bit less lardy.

The prize is a week at the wonderful Chez Castillon.

So, if you want to fight the flab, there's nothing to stop you! You can buy Jane's book here.

Posted by HelenMWalters at 18:09 2 comments: 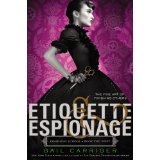 
I think I have fallen in love with a new series. This book was even better because I listened to the audiobook and Moira Quirk, the narrator, took this book to the next level for me. She was awesome! If I closed my eyes and let my imagination go it was like watching a movie. I could literally picture all of the characters. She was excellent with the different voices and I finished this book wanting to start it all over again.

Obviously, the narrator had to have good material to start with in order for this to be a great audiobook. I have to say that Gail Carriger has another winner on her hands. This was a great story. One of the best things about this Etiquette & Espionage was the characters. I loved Sophronia and Dimity, well, even Pillover, despite the fact he is study to be an evil genius. One of the most refreshing things was seeing old friend's from the Parasol Protectorate series. It was really cool seeing them as children. Actually, that was something else that made this a wonderful book, having this Steampunk era book told from the perspective of children and teens.

The mystery in the book was also interesting and it was exciting. Who knew a mystery could be so exciting without a nice, juicy murder? There was a great deal of action and it was also great to have one of my favorite settings, an academy school and this school really has a twist. I have to admit that Sophronia's family was also quite fun. One of the best things is that Gail Carriger's humor really came through in this series also. It really was much more funny than the Protectorate series and I thought it was quite hilarious, more so, on audiobook, as I read the books and listened to the audiobooks, which is a sure sign of a book being one of my favorites.

Unfortunately, now I must play the waiting game for the next book in the series. Boy, it would be nice if she published twice a year.

Review can also be seen at LadyTechie's Book Musings
Posted by HelenMWalters at 12:33 No comments:

Today, my special guest is Alison Morton, who is here to talk about her new book, Inceptio. It sounds like a fabulous book and you can find out how to get hold of a copy below. Meanwhile, over to Alison ...

Thank you very much for welcoming me to your blog, Helen.

Today, my debut novel, INCEPTIO, is published. Hooray! Three years of slog – researching, writing, and polishing – have led to this exciting moment. It’s a thriller, so it’s doubly exciting. Now, I’d like to tell you about it! But too much telling’s frowned on by Those Who Know, so let me show you…

An eleven year old fascinated by the mosaics in Ampurias (huge Roman site in Spain), I asked my father, “What would it be like if Roman women were in charge, instead of the men?” Maybe it was the fierce sun boiling my brain, maybe it was just a precocious kid asking a smartarse question. But clever man and senior ‘Roman nut’, my father replied, “What do you think it would be like?” Real life intervened (school, uni, career, military, marriage, motherhood, business ownership), but the idea bubbled away in my mind and INCEPTIO slowly took shape.

Of course, I made the classic mistake of submitting too soon, but had some encouraging replies. Several rewrites later and I’d made some full submissions, even to a US agent! I had replies like ‘If it was a straight thriller, I’d take it on’ and ‘Your writing is excellent, but it wouldn’t fit our list.’  Cue sound of grinding teeth, if it wasn’t a cliché.

I was (am!) passionate about my stories and the world I’ve imagined so I decided to self publish with bought-in publishing services. Using high quality professional backing (editing, advice, registrations, typesetting, design, book jacket, proofing, etc.), I’ve found it a fantastic way for me as a new writer to enter the market.

How is an alternate history thriller different from a normal thriller?
Alternate history is based on the idea of “what if”? What if King Harold had won the Battle of Hastings in 1066? Or if Julius Caesar had taken notice of the warning that assassins wanted to murder him on the Ides of March? Sometimes, it could be little things such as in the film Sliding Doors, when the train door shuts and Gwyneth Paltrow’s character splits into two; one rides away on the train, the other is left standing on the platform.

The rest of the story or history of a country, from that point on develops differently from the one we know. In my book, Roma Nova battled its way from a small late fourth century colony somewhere north of Italy into a modern high tech, financial mini-state which kept and developed Roman Republican values, but with a twist. It’s really been fun working this out! The thriller story then takes place against this background. The nearest comparison would be J D Robb’s Eve Dallas Death series.

Stories with Romans are usually about famous emperors, epic battles, depravity, intrigue, wicked empresses and a lot of sandals, tunics and swords. But imagine the Roman theme projected sixteen hundred years further forward into the 21st century. How different would that world be?

So what’s INCEPTIO about?
New York – present day, alternate reality. Karen Brown, angry and frightened after surviving a kidnap attempt, has a harsh choice – being eliminated by government enforcer Jeffery Renschman or fleeing to the mysterious Roma Nova, her dead mother’s homeland in Europe. Founded sixteen centuries ago by Roman exiles and ruled by women, Roma Nova gives Karen safety, a ready-made family and a new career. But a shocking discovery about her new lover, the fascinating but arrogant special forces officer Conrad Tellus who rescued her in America, isolates her.

Renschman reaches into her new home and nearly kills her. Recovering, she is desperate to find out why he is hunting her so viciously. Unable to rely on anybody else, she undergoes intensive training, develops fighting skills and becomes an undercover cop. But crazy with bitterness at his past failures, Renschman sets a trap for her, knowing she has no choice but to spring it...

And next? I’m working on PERFIDITAS, the second book in the Roma Nova series.
You can find INCEPTIO on Amazon UK here.