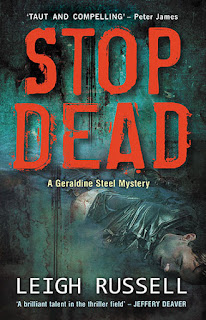 Tell us about your latest book, ‘Stop Dead’.

In ‘Cut Short’, ‘Road Closed’, and ‘Dead End’, Geraldine Steel worked for the Murder Squad in Kent. In ‘Death Bed’ she moved to London, so ‘Stop Dead’ is the second of the London novels. Once again the reader follows Geraldine’s search for a killer who proves to be elusive as well as deadly. The only clues the police have are two samples of DNA found at the crime scenes.  The first of these matches the DNA of a woman who has been in prison for twenty years, the second is from a woman who has been dead for two years. It makes no sense, but Geraldine has to solve the mystery if she is to find the killer who has embarked on a killing spree.

The last two books have seen a move to London for Geraldine. How has this opened up new possibilities for you as a writer?

My main interest is in character, so probably the most significant difference for me was the opportunity to introduce her new team, Detective Sergeant Samantha Haley and Chief Inspector Reg Milton. While pursuing a murder investigation, Geraldine establishes relationships with her new colleagues and adapts to working in the Met.

Has ‘Stop Dead’ got a really juicy baddy in it?

It’s important for me to understand my characters, otherwise they risk becoming two dimensional functions of the plot. Like all my villains, the killer in ‘Stop Dead’ is a damaged character, in some ways as much a victim as the people who are killed. Nevertheless, the nature of the killer’s experience leads to some quite horrific murders… It is quite tricky to talk about it without revealing the killer’s gender!

Geraldine Steel seems to be a big hit.  What is it about her that has made her such a good series character?

When I wrote ‘Cut Short’ I didn’t expect anyone to read the manuscript, let alone publish it. It certainly never crossed my mind that ‘Cut Short’ might turn out to be the start of a series. So Geraldine Steel turned up, unplanned, as the detective who would solve the case in ‘Cut Short’. She managed that quite efficiently and believably, and seemed to catch my readers’ imagination before I really knew her. Most authors of series plan their protagonist’s life story before they begin writing but Geraldine is evolving throughout the process of writing the books. I wonder if this is what interests her fans - the ambiguity and development in her character that makes her seem real.

Do you think crime writing particularly lends itself to long running series, and why?

Yes, By its nature, crime writing is episodic. The detective is the thread that runs through the series, moving on from case to case, while each book has its own complete story. So an author can continue indefinitely with different murder cases to be solved.

What’s next for you?  Are you going to continue writing books about Geraldine, or do you have something else up your sleeve.

Yes to both! Initially my publisher offered me a three book deal for Geraldine Steel. Those three books all became bestsellers so my publisher asked me for another three books. ‘Stop Dead’ is the fifth book in the series, so I’m currently working on the sixth. I’m meeting my publisher in a few weeks’ time to discuss our next contract - hopefully for the next three Geraldine Steel novels! We are also exploring the possibility of a spin off series for Ian Peterson, the sergeant Geraldine left behind in Kent when she moved to London in ‘Death Bed’. I’ll keep you posted!

What’s been the most exciting thing to happen on your writing journey so far?

There have been so many highlights, it’s impossible to pick just one.  Here are a few that spring to mind: signing a contract with my publisher, seeing my books on the shelves in bookshops, being shortlisted for a CWA Dagger Award, being sent a personal endorsement by Peter James, reading good reviews in The Times – in fact good reviews anywhere - being invited to share Jeffery Deaver’s champagne al fresco on a summer evening, meeting Lee child, Ian Rankin, Val McDermid, Clive Dexter, and all the crime writing gang, receiving an invitation to teach on the Greek island of Skyros, spending time with a Murder Investigation Team… but the biggest thrill is still writing!

Thank you for interviewing me here and keep writing!

Thanks to Leigh for sharing those thoughts about writing and giving some tantalising hints about 'Stop Dead'. I can't wait to read it now!

You can pre-order 'Stop Dead' for Kindle now here.

And you can buy Leigh's other books here.

Posted by HelenMWalters at 11:07 3 comments: