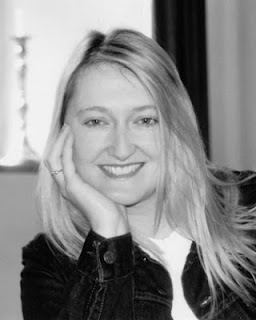 I'm very pleased to have Victoria Connelly here today to talk about her trilogy of magical romantic comedies, 'It's Magic'.

I think I’ve always wanted to be a writer.  I started my first novel when I was fourteen and used to take it to school and pass it under the table for my friends to read during Maths lessons.  Of course, it was a romantic comedy and I’ve never stopped writing them since.
I never finished that first attempt at a novel and it was many years and many rejections from agents and publishers later that my first one was published.  It was called Flights of Angels and it was about a young widow who has her own group of tiny guardian angels to take care of her.  It was a romantic comedy with a touch of magic but that touch of magic was what stopped it being published in the UK.  Nobody seemed to think that readers wanted magic in a rom com.  However, things were different in Germany where five publishers set up a bidding war for it.  It was a whirlwind experience and resulted in four different editions of the book being published as well as a film being made – an experience I’ll never forget!

Then came two more magical romantic comedies.  Unmasking Elena Montella about a woman who is given a magical Venetian mask which helps her choose which of her three (yes – three!) fiancés is the right one for her.  And Three Graces about a young woman who marries a duke and goes to live in his ancestral home only to find it’s haunted by a rather opinionated eighteenth-century ghost.

I had so much fun writing these books but they were never published in the UK even though they’d done so well in Germany.  So, whilst writing my ‘straight’ rom coms like A Weekend with Mr Darcy and The Runaway Actress, I’ve decided to make my magical rom coms available on Kindle where you can buy them individually or as a trilogy called It’s Magic.

So, if you like your rom coms peppered with naughty guardian angels, magical Venetian masks and haughty ghosts, give them a try and let me know what you think.  I really hope you enjoy them.

You can find 'It's Magic' here. 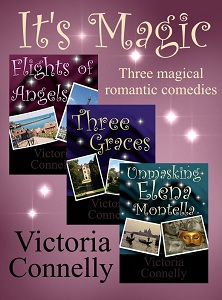 Thanks to Victoria for being such an interesting guest!
Posted by HelenMWalters at 12:10 3 comments: