Did You See Melody? by Sophie Hannah

Did You See Melody?

I loved this book. It has everything. A brilliant setting. An inexplicable mystery. And great characters.

When Cara Burrows decides she needs to escape from her family she ends up at the very swish Swallowtail resort in Arizona. She arrives in a state of exhaustion just wanting to collapse into her hotel room bed and sleep. But there's a problem. When she gets to her allocated room and opens the door, two people are already in there.

Cara becomes certain that one of the occupants of the room is Melody Chapa, who was supposedly murdered several years earlier and whose parents are in jail for the crime.

The story explores Cara's experiences from that moment on as her discovery leads her into danger. This part of the narrative is intercut with accounts from the past that deal with Melody's early life and her abduction and murder. There's some interesting stuff here about how the aftermath of her disappearance is dealt with by the authorities and the US tendency towards trial by television.

As we move towards finding out the truth about Melody, Cara must ensure her own safety and become reunited with the family she so recently wanted to get away from.

The plot is complex, original and entertaining and the ending was so unexpected that I had to go back and read the last few pages again.

I received a review copy of this book from the publisher via Netgalley.

Posted by HelenMWalters at 15:29 No comments:

The Vanishing Of Audrey Wilde by Eve Chase

The Vanishing Of Audrey Wilde

When Jessie and her family move into Applecote Manor she thinks it will be a new start for all of them, and that her stepdaughter, Bella, might finally settle down and begin to come to terms with the loss of her own mother. Little does she know that her family’s life is about to be impacted on by events that happened to another family many decades ago.

One thread of the story deals with the present day story of Jessie while another recounts the events of a summer in the 1950s when the narrator, Margot, and her three sisters visit their aunt and uncle at Applecote. This triggers memories of a previous summer, five years earlier, when their cousin, Audrey Wilde, disappeared never to be seen again.

Margot’s similarity to her missing cousin results in her being drawn into some uncomfortable, and ultimately dangerous situations. Following her through this experience is gripping and intriguing.

The dual narrative works well with both threads being equally compelling and the added interest of being able to pick up the subtle links between the two. Ultimately the two threads entwine at the end providing a very satisfying conclusion.

The mystery of what happened to Audrey is central to the story, but there is so much more to the plot than that. In both the past and present narratives we explore some really complex relationships between the different characters and how they trigger and influence events.

Some poignant themes are explored in this novel. Mothers bereft of their children, and children bereft of their mothers, is a strong link between the two threads of the story. Another is what it means to be sisters and the importance of that relationship. And love and longing, when you feel like you are always second best, also makes an appearance.

The characters and the relationships between them are beautifully drawn, and this results in a satisfying and emotional read.

I received a review copy of this book from the publishers via Netgalley.

Posted by HelenMWalters at 17:33 No comments:

The House by Simon Lelic

I found this to be a challenging but intriguing read. Structurally, it is interesting. The first section of the book is an account of events leading up to the present written in tandem by the two main characters, Jack and Sydney. From midway through we pick up the story as it moves forward.

In the early chapters, We learn that Jack and Syd are a young couple who are desperate to get onto the London housing ladder but find that all the properties they want slip through their fingers. Until one day they make a bid on a rather unusual house and learn, to their surprise, that they have been successful

So far, so good. But shortly after they move in weird things start to happen including Jack finding a dead cat in the attic.

It is interesting reading Jack and Syd’s different perspectives on events and seeing the ways in which they are not being entirely honest with each other. Partly as a result of this, neither comes across as entirely likeable.

Things get more complicated when Syd takes an interest in a young local girl, Elsie, who is a victim of domestic abuse at the hands of her father. Domestic abuse resonates for Syd, and ultimately is a huge theme and driver of the plot for this story. Elsie also turns out to be one of the most sympathetic characters in the book. I found myself really rooting for her.

Manipulation and deceit are at the heart of the story. Who is really pulling the strings behind recent events? What are Jack and Sydney hiding from each other? Is Sydney still a victim of her past?

This is a novel in which nothing is as it seems, and which will deliver surprises not just at the end but throughout.

Posted by HelenMWalters at 11:39 No comments:

What would you do if you received a Friend Request on Facebook from someone you believed had been dead for years?

When it happens to Louise it sets in train a series of events that put her and others in serious danger. At first she has no idea if the 'Maria' who has sent her a friend request is genuine or not, so she starts to track down other friends from the time in order to attempt to piece together what is going on.

The present day narrative is interspersed with flashbacks to Louise's schooldays in the 1980s and the past and present collide when Louise decides to attend a school reunion and comes face to face with people who knew Maria in the past. But who has organised the reunion and why?

As well as being a gripping thriller, I found Friend Request quite a poignant story as well. It deals with the tensions and jealousies between school girls and the ways in which that can spill over into adult life really well, and also depicts Louise's broken marriage from her childhood sweetheart Sam, and her relationship with her young son in a touching way.

Through many twists and turns the tension doesn't let up and ultimately the truth of what happened back then, and what is happening now is revealed in an explosive ending.

I received a review copy of this book from the publishers via Netgalley.

Posted by HelenMWalters at 14:02 No comments:

See What I Have Done by Sarah Schmidt 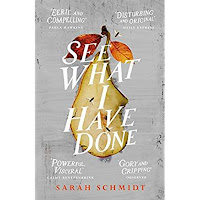 See What I Have Done

Based on the true story of Lizzie Borden who stood trial for the murder of her father and stepmother, 'See What I Have Done' is a compelling and well crafted novel.

The use of language is experimental in places, and the structure fragmented as Sarah Schmidt takes the reader backwards and forwards in time and in and out of different points of view. This complexity accentuates a story in which there is still much unsolved mystery.

It is not known whether Lizzie Borden did kill her parents or not, and in the novel we are presented with a mosaic of different scenarios. Things that might and could have happened. Reasons why they might have come about. Dark motives at the heart of a fractured family.

The writing is very accomplished and recreates authentically the claustrophobia of the Borden household. Father, stepmother and two adult daughters are living in close proximity to each other with all the tension and awkwardness that creates.

This book is not always an easy read. The visceral and sharply evocative descriptions of decay and death are so realistic that they assault the senses. But the quality of the writing and the execution of the plot are masterly and the overall read is well worth it.

A recommended read for anyone who craves the unusual, and for anyone who is familiar with the real life story of Lizzie Borden and intrigued to enter a fictionalised version of her world.

Posted by HelenMWalters at 12:47 No comments: