I'm very lucky to have another lovely weekend guest on Bookersatz. Novelist Rosy Thornton has written a very evocative review of 'A Month In The Country' by J L Carr. I now feel like I not only want to read the book, but also watch the film which stars the delicious Colin Firth. Sigh.

Regular readers of Bookersatz and this blog will know that I've really enjoyed reading Rosy's own books. You can find my reviews of 'The Tapestry Of Love' here and 'Crossed Wires' here.

My plans for the rest of the weekend involve reading, sleeping, watching television and gardening. I hope you all have a good one.
Posted by HelenMWalters at 09:17 3 comments:

Update On My Short Story Workshops

I've been really pleased with the response to my short story workshops so far.

I still have a couple of places left for the workshop on 30 July. If anyone wants to come to this one please let me know so that I can get full details and a booking form out to you as soon as possible.

Bookings are now open for the same workshop on 17 September as well, so if you'd like to come to this one please let me know.

I also have an 'interested' list of people who can't make the July or September dates, so it looks likely there'll be a third date. If you'd like to be added to this list, I'll let you know as soon as there are firm details of a third date.

Thanks everyone, and particular thanks to those who've helped to spread the word.
Posted by HelenMWalters at 18:32 8 comments: 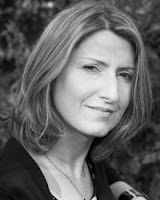 ... is my weekend guest on Bookersatz.

Isabel Ashdown lives in West Sussex with her carpenter husband and two children. Her first novel 'Glasshopper' (Observer 'Best Debut Novels of the Year', London Evening Standard 'Best Books of the Year') was published to critical acclaim in 2009 and an extract from the novel won the Mail on Sunday Novel Competition. Isabel Ashdown's second novel 'Hurry Up and Wait' was released in June 2011.

I've loved reading Isabel's books and you can find my reviews of both of them on Bookersatz. Her review of 'Crow Lake' by Mary Lawson is on Bookersatz now, so please pop over and have a look.
Posted by HelenMWalters at 10:04 No comments:

The phenomenally successful crime writer Leigh Russell has asked me to tell you about a creative writing course she is holding in October. Not only is it bound to be full of brilliant advice from a best-selling author but it is also being held in France! What more could you want?

If you haven't already seen it, don't miss my interview with the wonderful novelist Tana French below this post.

In other news, I sold two stories to Take A Break Fiction Feast yesterday and I'm about to start on a new article about short story writing for Writing Magazine. Do have a look around their fab website if you haven't already.

Hope you're all having busy and productive weeks.
Posted by HelenMWalters at 11:36 4 comments:

An Interview With Tana French

Tana French, author of the amazing 'Faithful Place' is my guest today.


Tell us about your most recent book ‘Faithful Place’.

Frank Mackey showed up in 'The Likeness' as Cassie’s old undercover boss, a detective who’ll cheerfully do anything – to himself or anyone else – to get his man. In 'Faithful Place', he’s the narrator. Twenty-two years ago, he and his first love, Rosie Daly, were teenagers in Dublin’s inner city, making plans to run off to London and get good jobs, get married, escape from all the poverty and problems of their tight-knit community. On the night when they were meant to leave, though, Rosie never showed. Frank assumed she’d dumped him, probably because of his deeply dysfunctional family. He never went home again. But then Rosie’s suitcase is found in an abandoned house on Faithful Place, and Frank is going home whether he wants to or not…


I loved ‘Faithful Place’ and in particular found its setting in Dublin very vivid. Is this a geographical area that means a lot to you?

I’m very glad you liked it! I was an international brat, grew up in three continents, so there’s nowhere I can really call ‘home’; but Dublin’s the nearest I’ve got. I’ve lived here since 1990; it’s the only city where I know all the details and quirks – the connotations of every accent and area, the slang and the sense of humour, where to go for a good pint and where not to go after dark. And I can list all the ways in which it’s crap, while being ready to leap to its defence if anyone from anywhere else suggests it might not be perfect. In a lot of ways, 'Faithful Place' is a love song to Dublin – its bad sides as well as its good ones.

What first attracted you to the idea of writing crime/mystery?

I love mysteries – real ones, fictional ones, historical ones, mythical ones, you name it. I always have, ever since I was a kid. It’s not just the process of watching them get solved that I love – although that’s hugely satisfying – it’s the mysteries themselves, for their own sake. I think it was inevitable that, when I started writing, it was going to be mystery.

I’m always looking for the potential mystery in things. 'In the Woods' came out of a wood near an archaeological dig where I was working – one day I was looking at it and thinking it would be a great place for kids to play, and then I thought, What if three kids ran in there one day, and only one came back – and he had no memory of what had happened to the other two? And what if he grew up to be a detective, and a murder case drew him back to that wood? My second book, 'The Likeness', came out of a pub conversation about what it would be like to meet your double; I started wondering what it would be like to meet her when it was too late, when she was dead, and the only way you could get to know her was to go into her life – to become her, in a way. And 'Faithful Place' came out of a blue suitcase in a skip, outside an old house that was being gutted; I started wondering what was in it, who had left it in that house and when, whether they had meant to come back for it…

I’ve just handed in my fourth book, 'Broken Harbour', in which Scorcher Kennedy (Frank’s old friend/rival from 'Faithful Place') deals with the murders of a young family on one of the ghost estates that have been festering all over Ireland since the Celtic Tiger. I’m hoping to stick with the same general group of characters – the Dublin Murder Squad, give or take – for a while. I hop from narrator to narrator, with a supporting character from one book becoming the narrator of the next, and I’d like to keep doing that, more or less: it means each book helps to springboard me onto the next one, and it means I get to explore the ways in which the previous narrator’s viewpoint may not have been the whole objective truth.


What’s the best advice you could give to someone who is writing a novel and hoping to get it published?

Don’t get discouraged if you’re hammering away at a sentence or a paragraph or a chapter, and it keeps coming out wrong. You’re allowed to get it wrong, as many times as you need to; you only need to get it right once.
That was a big revelation for me when I was writing 'In the Woods'. I was used to acting in theatre, where you need to get it right every time, because you’re playing to a different audience every night, and tonight’s lot don’t care if you were amazing yesterday. It took me a while to realise that, with writing, it all counts as rehearsal until you actually hand the manuscript over to someone else. There’s nothing wrong with making a mess on your way to getting it right.

Thanks to Tana for those great answers. I particularly like the idea of 'Faithful Place' being 'a love song to Dublin'.

Sue Guiney - My Guest on Bookersatz

Just a quick post to let you know that I have another very special weekend guest on Bookersatz today.

Sue Guiney has reviewed 'Private Life' by Jane Smiley, so please pop over and have a look at what she has to say.

Sue's own book 'A Clash Of Innocents' is absolutely fantastic, so if you haven't read it yet, I highly recommend it.
Posted by HelenMWalters at 08:48 1 comment:

My article on 'writing short stories that stand out' is in this month's Writing Magazine. If you haven't already, you can find the magazine's very useful website here.

There are also articles from Simon Whaley, Adrian Magson and many more.

For those interested in writing for the women's magazine market, my first workshop is due to take place on 30 July, and full details can be found here. If you'd like to come along, please do get in touch.

I've been really pleased so far with the interest in my weekend guests on Bookersatz and I can tell you that in coming weeks we have Sue Guiney, Rosy Thornton, Tamsyn Murray, Isabel Ashdown, Kate Lord Brown and Leigh Russell contributing reviews.

As many of my blog readers will know, I've been a fan of Leigh Russell's work for a long time now. Her latest novel is called 'Dead End' and it has reached number 21 on the Amazon Kindle bestseller list. It's downloadable for 99p over the summer, so let's see if we can get it up into the top 20!

You can download 'Dead End' for Kindle here.
Posted by HelenMWalters at 14:18 3 comments: