The ‘Nowhere To Hide’ blog tour is over. It's been great fun, and if you've missed any of the posts you can find them by following the links below.

The first post in the blog tour, an interview with Marie Donovan, can be found on Leigh Russell's blog.

The second post in the blog tour, an interview with Jack Brennan, can be found on Sally Quilford's blog.

The third post in the blog tour, an interview with Lizzie Carter, can be found on Womagwriter's blog.

The fourth post in the blog tour, an interview with Hugh Salter, can be found on Cally Taylor's blog.

The fifth post in the blog tour, an interview with Keith Welsby, can be found on Debs Carr's blog.

And now you can read a special bonus post on the author's own blog. An interview with Liam, who's been sadly overlooked so far. Make sure you read the comments on this one. Looks like Liam (and Marie) have good reason to be worried.

‘Nowhere To Hide’ is published by Avon HarperCollins, and you can buy it here.

And if you want to read Marie's debut appearance, you can find that in Trust No One, which you can buy here.

Thanks so much to all our blog hosts, everyone who read and commented on the posts, and everyone who bought the book.
Posted by HelenMWalters at 10:33 No comments:

‘Stop Dead’ is the fifth book in the Geraldine Steel series from Leigh Russell. I’ve enjoyed all the books in the series so far, and was really pleased to be sent a copy of this one by the publishers.

The last book in the series saw Geraldine move from a provincial police force in Kent to London to join the Met. Now, in book five, she is settling in to her new job and her new life, making new friends and working out her place in the new professional structure in which she finds herself.

I was delighted though, that we get the added bonus of some welcome glimpses of her former life and colleagues in this story, in particular an appearance from Ian, Geraldine’s former sergeant and a popular character in the earlier books.

This book wastes no time getting into the action of the plot. A successful businessman is brutally murdered, and at first the police suspect his glamorous wife and her young lover may have something to do with it. But when his business partner is also murdered it becomes clear there is more to it than meets the eye.

Bafflingly, the only clues in the case lead in a direction that seems impossible - to two women: one dead, the other in prison. It is left to Geraldine and her colleagues to attempt to find out who is doing it and why before more people die.

Like the books that came earlier in the series, this one doesn’t flinch from exploring dark themes, but as ever it is done in a way which throws light on the plot and on the motives of the murderer.

Leigh Russell has kept Geraldine’s story fresh by moving her to a new place, but in any case there seems no danger of the Geraldine Steel series growing stale. This book did feel different from the others in many ways – it’s hard to say much more than that without giving away too much about the plot. If you want to know what I mean, you’ll have to read it! For fans of Geraldine there is enough here that feels familiar and recognisably a DI Steel story, but equally plenty to intrigue and move things in a different direction.

As always, the balance of criminal investigation and storyline about Geraldine’s own life is spot on. As this series goes on we find out more about Geraldine’s personal life and that has become an intriguing conundrum in itself. I look forward to another instalment of this in the next book.

For lovers of crime fiction and strong female protagonists this is a brilliant, not to be missed, novel. I couldn’t put it down and read it very quickly in a couple of sittings, so keen was I to know what was going on and what the outcome would be.

Many thanks to the publisher for a review copy of this book.
Posted by HelenMWalters at 10:19 No comments:

... in the Nowhere To Hide blog tour is an interview with Keith Welsby.

You can read it here.


Posted by HelenMWalters at 21:24 No comments:

The Secret Life of William Shakespeare by Jude Morgan

A guest review from Stephen Shieber


The Secret Life of William Shakespeare

It's always difficult to come fresh to a book about such a famous character.  We bring our preconceptions to it and have to try to move beyond them to accept the writer's portrayal of their character. Jude Morgan makes this easy for us.  Her characterisation gets to the heart of the great man's inner life, while holding us at the distance we'd expect in someone who spends the majority of their life make-believing.

This is a rich, dense book. Morgan's language is poetic and measured, evoking the age without attempting a slavish reproduction of it.  Her Shakespeare does have a secret life, but so does every one of the characters who take a turn in the narration: John Shakespeare, Anne Hathaway and Ben Jonson.  The story switches easily between Stratford and London, yet Morgan makes it clear that Shakespeare is never truly at home in either.  His home is in his words and, ultimately, they speak for him.

This is a book that probably holds few surprises for those who know something of Shakespeare's life, but it is a book that will haunt you with images long after you have turned over the last page.  This is historical fiction at its very best, able to enunciate the unchanging constants of the human condition, just as the playwright himself did in his plays.

Many thanks to Stephen for this review.

Stephen Shieber is the author of Being Normal.

Thanks to the publishers for the review copy of this book.

For anyone following the 'Nowhere To Hide' blog tour, the fourth post is now up on Cally Taylor's blog here. You'll be able to read the fifth and final post on Debs Carr's blog next Wednesday.
Posted by HelenMWalters at 17:35 No comments:

An Interview With Lizzie

In case anyone hasn't seen it yet, you can now read the third post in the 'Nowhere To Hide' blog tour on Womagwriter's blog.

An interview with Lizzie Carter is here.

Some great comments as well - people seem to like the idea of character interviews!
Posted by HelenMWalters at 10:35 No comments:

Today the second post in the Nowhere To Hide blog tour can be found on Sally Quilford's blog.

This is your chance to meet the charming Jack Brennan!
Posted by HelenMWalters at 11:00 No comments: 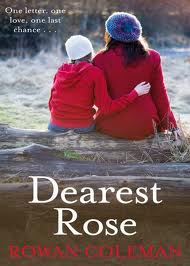 Having loved Rowan Coleman’s last book, ‘Lessons In Laughing Out Loud’, I was thrilled to receive a review copy of ‘Dearest Rose’. This is a very powerful book which explores some extremely dark themes, and will keep you gripped to the very end.

Rose and her daughter Maddie are on the run, and this novel is the story of what they are on the run from, and to. The home situation that has become so unbearable that Rose can’t take it any more is slowly revealed, and we also find out what Rose is looking for and are kept in suspense about whether she will find it or not.

There are some beautiful moments in this book. I found the story of how Maddie gets to know her grandfather, John, particularly touching. The two of them find a companionship through a shared love of art which is beautifully told and gives the novel a gorgeous sense of warmth.

‘Dearest Rose’ is very much a book about strong women. From Rose herself, who turns out to be stronger than she thinks, to her friend Shona, who goes through hell and survives, her landlady Jenny who turns out to be a bigger support than Rose could have imagined and a woman from Rose’s past who turns out to be the last thing she would have expected, all are real, gutsy female characters.

The novel also has a love story running through it. It’s hard to say too much about that without spoilers. So I won’t! But you won’t be disappointed.

As well as the interactions between the various interesting and believable characters in the story, art and the landscape play an important part in the novel as well. John’s paintings, and the landscapes he often includes in them, are pivotal to the story and add to the great atmosphere of the book.

I love Rowan’s writing and really enjoyed this book. It does include some very difficult subject matter and definitely doesn’t shy away from the darkness of its themes. Overall though, it is ultimately an uplifting story, which tells of friendship, courage, redemption and love.

Thanks to the publishers for the review copy of this book.
Posted by HelenMWalters at 19:47 No comments:

The first post in the 'Nowhere To Hide' blog tour has gone up a tiny bit early, so you can take a sneak preview now if you like.

The post is an interview with Marie Donovan, the star of the book, and you can read it on Leigh Russell's blog here.
Posted by HelenMWalters at 20:02 1 comment:

I'm pleased to announce details of the blog tour for Nowhere To Hide by Alex Walters!

The tour will be a series of exclusive mini interviews with the characters of the book. They'll be revealing everything from who they'd most like to take out to dinner, to who they'd like to play them in a dramatisation of the book.

Here are the tour dates and locations:

Nowhere to Hide: ‘On the North Wales coast two people traffickers are brutally murdered; a drug dealer is mown down in inner-city Stockport and in a remote Pennine cottage a police informant is shot dead. Seemingly random, these murders are the work of one professional hitman.
Reluctantly, Marie Donovan takes on another undercover role and finds herself working with DI Jack Brennan, a high-flying detective with a tarnished career. Soon, mistrustful of each other and their superiors, both begin to suspect that they are mere pawns in a complex game of criminal rivalry and police corruption.
As Marie struggles to uncover the truth, she realises that nothing is as it seems. With every move, she draws the threat ever closer until ultimately the killer is watching Marie herself. Out on her own, she finds herself with no friends, no-one to trust and nowhere to hide.’

You can buy Nowhere To Hide here.

Posted by HelenMWalters at 16:50 5 comments: