This is a beautifully atmospheric book. The story of Katie, growing up on Long Island in the 1970s, is sensitively sketched and the use of language is exquisite. There’s a heady mix of youth, adventure, love and tragedy about it.

It tells of the pain of growing up, the pain of not being sure what your place in the world really is, and the loneliness of not being with the person you want to be with. Katie is waiting for something to happen, to change her life and give it meaning. She knows she wants that to involve Luke, but Luke has come back from Vietnam damaged, and she doesn’t know whether she’ll ever be able to get through to him.

Around her, the other inhabitants of the community make and break relationships, get high on drugs and alcohol, get pregnant and get abortions. And slowly they start to move away. First Maggie, then Ginger, then Georgie: moving to new places and new lives. Leaving Katie behind.

The structure of the novel is quite complex. There is a linear thread that follows Katie through the summer while she waits for Luke to notice her, but there are also a number of sections that travel back in time and almost provide separate stories in themselves.

As a result of this there are some lovely character cameos; glimpsed for a short time only and then gone. One of the best is Martha Muldoon. She works with Katie in the A&P store, and everyone hates her until one day she shows her human side by trying to help a customer get away with goods she can’t afford, and gets sacked for her trouble. It is a testament to the writing that these characters are just as real as those we get to spend more time with.

There is a lyrical and dreamlike quality to this novel, and I enjoyed it very much. Now that it’s over, I’ll really miss Katie.

Posted by HelenMWalters at 15:50 No comments:


When Wren Irving's numbers come up in the first National Lottery draw, she doesn't tell her husband, Rob. Instead she quietly packs her bags, kisses her six-month-old daughter Phoebe goodbye, and leaves.

We pick up the story two decades later. Rob is now living with childhood friend Laura who has taken over mothering duties of Phoebe, and Phoebe is herself pregnant. They have no idea where Wren is until a journalist tracks her down.

Wren has rebuilt a life of sorts for herself, very different from the family unit Rob has with Laura and Phoebe. She lives near the sea and spends her days on the beach with her two dogs Willow and Badger.  Her only friend in the world is Arthur who sells her a cup of coffee every morning. She has deliberately shut herself off,  and feels things crashing down around her when the same journalist contacts her.

As Wren's secret existence is revealed, another secret from the past catches up with Rob, leaving him uncertain what to do and cut off from Laura just when he needs her most.

The story weaves backwards and forwards between this present day narrative and a historical narrative that takes us back to Rob and Laura's childhood together, and the pivotal moment when they both meet Wren for the first time.

Two strong themes in the story are motherhood and love.

What is the nature of motherhood? Why can't Wren cope with motherhood, and how could she have left baby Phoebe behind? Does it have anything to do with her relationship with her own mother? And how does it feel for Laura to take on the mother role in Phoebe's life when she hasn't been able to become a mother herself?

The love aspect is also interesting. Rob loves Wren and Laura in different ways and at different times, forming what is in some ways a classic love triangle but in many ways something much more complex than that.

I really enjoyed this book. There's so much to it, and you can only really scratch the surface in a review. It encompasses so much life and emotion in its journey through the decades and through the lives of Wren, Laura and Rob. Keeping the reader's sympathy with all three of them is a fine balancing act, but it works. Wren, in particular, could have been a really off-putting character, but is handled so sensitively that she isn't.

In the end the book does hold out hope for the future, despite what the various characters have suffered in their lives.

I strongly recommend this book to others, it is one that I will continue to think about for a while.

You can find reviews of some of Isabel Ashdown's other books here and here.

Posted by HelenMWalters at 12:42 No comments: 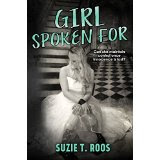 
A guest review from Lady Techie.


Girl Spoken For is the beginning of a new YA trilogy by Suzie T. Roos that I was granted an early release copy of from Netgalley. I have to admit that I was intrigued by the title of this book. It is what drew me to it and of course the blurb on the back cemented my desire to read this book. I kept going back and looking at the cover and trying to determine what about it kept drawing my attention. Even as I read it I kept going back to it. I finally figured it out after I finished the book and went back to the cover and stared at it like I do pictures in a museum. I won't give it away in case someone else had the same thing happen to them. It is a great cover but something that made me question what it means.

Girl Spoken For is told from the point of view of a 15/16 year old teen in the 10th grade, Tatum. It chronicles her daily life and how she ends up "spoken for" by the grandson of a mob boss. It also gives an in depth portrayal of how the normal trials of being a teen affect her. But, there are also some things most of us wish were not trials for a teen that she experiences that we watch her handle. These trials would shake up most adults so experiencing them with Tatum really draws you into the story. One of the best parts of Girl Spoken For is her inner dialogues as she reflects on conversations and events. I always reflect on events and conversations in my life and wondered if others had these same inner dialogues and even used to put them on paper until they were discovered by someone I wished had not discovered them because taken out of context most of our reflections might seem negative when read by the person who they are about even when they are not meant to be negative. Sometimes Tatum's thoughts spilled out on her friends and I was surprised and delighted by her friends' responses which reflected on how much they really cared for an understood her and her situation.

Tatum is extremely complex and I have to admit that I fell in love with her little sister, 6 year old Toni, and her responses to meeting Tatum's friends. She is so vibrant and innocent and there is this contrast I saw where Tatum also started with that same innocence and light until she starts experiencing some negative events. But, in school as she is internally dealing with these events her friends still were drawn to her and missing her light. We also see how a teenage girl goes through a relationship with her mother and those of us that had a contentious relationship with our mothers as teens can see from the outside how this might have looked and it was spot on. You hope that she comes out of it knowing that a lot of this is the teen not understanding the mother's role and just the conflict because the mother is the disciplinarian and the person guiding them through what they know a teenage girl can go through even if all they are doing is worrying because of their past experiences. Teens tend to see this as dislike by the parent when it is concern and the desire to protect. We also experience Tatum's thoughts and processing of her relationship with Zach. It was at times comical and at other times we cheered it on because of how much he cared for and protected her. You also worry about it because of his family. We only get a cursory glance at the structure and politics of his family towards the end of this part of the story which means I cannot wait for the next book and have already jumped on the author's website to see what I could learn about what was coming. Happy to see the next book, Girl Divided Two is coming soon.

This review first appeared on Lady Techie's blog.
Posted by HelenMWalters at 15:07 No comments: