Woman Walks Into A Bar by Rowan Coleman

My lovely friend and fellow writer, Rowan Coleman, is raising money for Refuge with the release next month of 'Woman Walks Into A Bar'. Rowan is looking for as much support as possible for this project and this is what she says in her press release about it.

WOULD YOU LIKE TO #SUPPORTAFRIEND AND HELP US TO RAISE £10,000 FOR REFUGE*
*no running or bungee jumping involved, just a great read!

On 10th September 2013, author Rowan Coleman is inviting women everywhere to #supportafriend and get involved in her mission to raise £10,000 for Refuge.
On this date Rowan will release her novella WOMAN WALKS INTO A BAR as an eBook and 100% of her royalties will go to the charity Refuge.

All readers have to do is to download WOMAN WALKS INTO A BAR from Amazon … and encourage as many women as they can to do the same. Simple!

When Rowan Coleman began work on her tenth novel she asked her 1500 Facebook fans if they would be willing to share their personal experiences of domestic abuse. She was shocked to discover 204 emails waiting in her inbox the following day.

So began the process of writing DEAREST ROSE, featuring a character inspired by the women Rowan spoke to. Rose, with the help of her friends, gradually finds the strength and courage to escape an abusive marriage along with her seven-year-old daughter.

DEAREST ROSE went on to win the Festival of Romance Best Romantic Read 2012, the RoNA Epic Romance Novel of the Year 2013 and was also shortlisted for the RNA Romantic Novel of the Year 2013.
To support publication and to spread the word Rowan is launching a campaign, #supportafriend, on Twitter and Facebook, encouraging women everywhere to tell us how they will support a friend on September 10th.If there’s one thing women do well, it’s friendship. Whether they bake a stressed-out work colleague a cake, give a long-distance friend a call to see how they are, or help a mum with a buggy off the bus, we’re asking the public to tweet their ideas and pictures, on the day, and to get involved with competitions and giveaways.

Please help Rowan spread the word about #supportafriend and encourage as many of us as possible to buy WOMAN WALKS INTO A BAR. We’d love you to review the book on your blog, on Amazon, on Goodreads and do anything else you can think of to help to raise the profile of the event via social media!
We are encouraging everyone to use #supportafriend and #womanwalks to try to focus activity on sales of WOMAN WALKS INTO A BAR, which is the quickest way to raise money for Refuge.

And of course the easiest way for you to support the #supportafriend campaign is to buy the book…buy two!

WOMAN WALKS INTO A BAR by Rowan Coleman

You can pre-order  Woman Walks Into A Bar here.
You can read my review of Dearest Rose here.

Please support Rowan in any way you can. Thank you.
Posted by HelenMWalters at 12:38 No comments:

The Bleiberg Project by David Khara 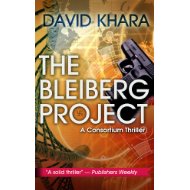 I received an e-copy of The Bleiberg Project by David Khara from Netgalley.

I have to admit when I think about reading anything related to the Holocaust it makes me want to run the other way. Knowing everything that was done and probably not being aware of some things makes it a hard subject to digest. I have to admit this is my first foray into reading about this topic for that very reason. But, when I read the synopsis I thought this sounds really good and just maybe there is a good enough ending that I will not feel totally depressed afterwards.

The characterization in the story was done really well. I have to admit that Jeremy Corbin, even without knowing his secret, makes it hard to like him. He is quite witty and also so darn down on himself it makes you want to avoid him. But, as the book goes on you start to become invested in his pain and hope that somewhere down the line things get better for him. Oddly enough his thoughts about Jackie Wells at first seemed a bit off to me, then as I read on I decided he is just a bit self-centered and immature and kind of thinks of her in high-school terms. Jeremy takes body blow after body blow in losses and as he deals with them throughout the book you start to see him maturing and growing and realizing how he lost more than he realized with his father.

I love reading books based in other countries, especially Europe and Eastern Europe. This book did a good job of giving me a bit of armchair travel. There was not a lot by way of describing the sites in the different places they visited when they arrived in Switzerland and made their way across to Poland but, there were enough of the descriptions that it grabbed my interest. What was really great was the tie-in to some of the rumors of some of the medical testing that happened in the camps. They were nicely woven into this book. But, my all-time favorite part of this book was Eytan Morg. I love reading about and seeing stories on television about the Kidon unit of The Mossad. Granted they are not nice people but, this was my first book that I got to read about some of what they do and what is known about their skills. It took me back to my favorite parts of NCIS and the character Ziva who was also Kidon. Eytan was larger than life and not just due to his size. He was this amazing, scarred man who didn’t allow himself to have anything other than the work he did and we find out why in The Bleiberg Project. That part of the story was riveting. Eytan’s fight scenes were awesome and jumped off the page when you read them. Interestingly enough at the beginning of the book you don’t know whose side he is on so he comes off as if he might be one of the bad guys but, he is so much more.

I just read on Goodreads that this is the start of a series and I have to say a very good start and I look forward to following this series every step of the way!

Review can also be seen along with more great information about The Bleiberg Project by David Khara here.
Posted by HelenMWalters at 10:58 No comments: