A French Pirouette by Jennifer Bohnet 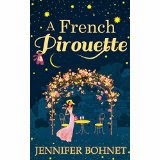 This is a delightful romantic story which follows three women as they embark on new chapters in their lives.

Libby is a widow and finds herself hankering for a new start in France, where she has memories of happy times with her late husband. But has she got the courage to go it alone?

Suzette is a top ballerina, but she's been brought low by injury and she now doesn't know what the future will hold for her.

Libby and Suzette both find themselves at the Auberge du Canal in Brittany, Libby as the new owner and Suzette as a guest. The third woman whose story we follow is Brigitte - outgoing owner of the auberge - who with her husband Bruno is moving on to a new, and hopefully more relaxed, way of life.

We see the three women as they find their feet in their new lives and try to cope with everything life has to throw at them whilst carving out their future paths.

Libby has to come to terms with the reality and responsibility of running the auberge single-handed. Suzette has to nurse her injury and make some huge decisions about her future. And Brigitte has to cope with the changing circumstances of her family.

I loved the French setting of the book - vibrant and authentic feeling. It really added to the story, and the auberge itself played an important part in the action. The love of food and its centrality to the world of the auberge shines through, and the book closes with a charming postscript in the form of some of Libby's recipes.

As the story plays out there is the possibility of romance for both Libby and Suzette. But is Libby ready? And can Suzette trust a man with her biggest secret?

This is a really enjoyable romance with great characters and plenty going on. You'll find yourself rooting for all three women as the story unfolds and as they get closer to fulfilling their dreams. A book to lose yourself in for a few hours!

Thanks very much to the author for a review copy of this book.
Posted by HelenMWalters at 12:44 3 comments:

A look at Pixel Hall Press ...

I was recently contacted by Pixel Hall Press to see if I'd like to review any of their publications. I was quite intrigued as they seem to be publishing some interesting things.

This is what they have to say about themselves:

Pixel Hall Press is a relatively new, old-fashioned small publishing house whose focus is on discovering literary gems and great stories that might have otherwise been overlooked.

Our mission is to publish books and short stories that energize the imagination and intrigue the mind, and to be a conduit between readers and provocative, stimulating, talented authors.

You can find out more at their website http://www.pixelhallpress.com

They kindly sent me one of their short stories to review, La Belle Femme by
Áine Greaney.

Told in the present tense, the story is that of Moira Walsh and Alan Power. Moira and Alan are having an affair, but neither of them are really sure they want to any more.

The story was immediate and well-painted, full of vivid descriptive detail. The story is in many ways an anti-romance and this gave it an interesting edge and bite. It invites you deep into two people's lives and for a brief time shows you all  that is most important about them.

It creates a diverting little picture of human relationships in the raw, and feels very authentic for that. And it leaves some questions open at the end, which again felt very real.

It was a great short read and it's good to see publishers getting behind short stories like this.

If you want to find out more about Pixel Hall Press do have a look at their website.  You'll find individual short stories, collections of stories, and novels.

You can find out more about Áine Greaney here.
Posted by HelenMWalters at 11:33 1 comment: