The Blue Hour by Alonso Cueto 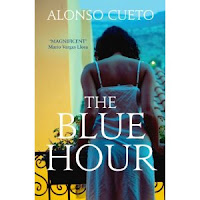 A guest review from Stephen Shieber

Adrian Ormache is a successful lawyer, enjoying a charmed life in Lima, Peru. When his venerable mother dies, he is forced to confront the ugly truths that lie beneath the surface of polite society.  These truths relate to Adrian's dead father, Colonel Ormache and his conduct towards the 'Shining Path' guerrillas during Peru's civil war in the 1980s.  As Adrian draws closer to his father's conduct, his whole life turns upside down and he must find a way to accommodate the ghosts of the past to ensure his future.

Cueto's prose, translated from the Spanish by Frank Wynne, confronts the horrors of war with stark beauty.  Occasionally tenses slip confusingly, but this is a slight criticism of a novel that warms and appalls by turns.  Adrian remains a sympathetic character, even when engaged in dubious action.  His attempts to heal past wounds appear to be futile, but the reader wants him to rise from the ashes of his notions of his family and find the right path in a confused world.  There are some graphic descriptions of the evils perpetrated by both sides of the war that are not for the squeamish, but there is also a sense of hope. Cueto makes it clear that 'the sins of the father' can be redeemed by his children.

Many thanks to Stephen for this review.

Stephen Shieber is the author of Being Normal.

Thanks to the publishers for the review copy of this book.
Posted by HelenMWalters at 10:29 No comments:

A Course And A Competition ...

Firstly, the lovely, talented and knowledgeable Della Galton is holding a short story writing course. Details are below. Highly recommended!
How to write and sell short stories with Della Galton - Saturday 9 March in Bournemouth
Course Content
This course will focus on what a short story is and how you can sell it.  We will look at existing short story markets (including magazines) and up to date information on what those markets require.  We will also be looking at other paying short story markets (including podcasts) and what they require. Advice will be given on house style and how to find ideas to suit your intended market. Courses are run on an informal lecture/discussion group basis.

Time and Cost
10.00 am to 4.00 pm
£35.00
For more details, and to book, see Della's website.
Secondly, the equally lovely Jane Wenham Jones has a fabulous competition on the go at the moment to win a writing course in the Dordogne in September at the fabulous Chez-Castillon.
It's to celebrate her newest Wannabe Book - 100 Ways to Fight the Flab - the Wannabe Guide to a Better Bottom, which is currently out on Kindle.
Full details of that are on Jane's blog.
I can highly recommend both Jane's teaching and Chez Castillon, so this is an amazing opportunity for someone.
I'll be reviewing 100 Ways To Fight The Flab on here soon, and you can read about how wonderful Chez castillon is here, and see their website here.
Posted by HelenMWalters at 16:35 1 comment:

Ali Knight’s books create a great sense for the reader of not knowing quite what’s happening or where the narrative is going. When I reviewed her last novel, ‘Wink Murder’, I commented that it had kept me guessing all the way through.

The same is true of ‘The First Cut’ although the way the story is told is very different. In ‘Wink Murder’ we had a first person narrative, whereas in this latest book we have a third person narrative from more than one perspective. So the tension and the disconcerting sense of not being sure what is real and what isn’t is created in a different, but equally effective way.

The book opens with main character Nicky discovering the murdered body of her best friend Grace. This life-changing event spirals a sequence of events that lead Nicky into deeper and deeper danger.

Nicky consequently marries Grace’s husband Greg, a decision that she may live to regret, and then gets tangled up with the young and good-looking Adam. But can she trust either of them? And who is it who’s really out to get her?

Fast-paced and genuinely scary in places, the plot will keep you guessing as AIi Knight teases out more and more strands of a complex story which takes in the colourful character’s of both Greg’s and Adam’s families and some dark events from the past that won’t let go of the present.

With this book you’ll feel the fear and almost believe you can feel the pain as Nicky undergoes both mental, emotional and physical trials, all of which are vividly portrayed.

Many thanks to the publisher for a review copy of this book.

Everyone knows what happened to the Titanic.  We’ve all seen Leornardo DiCaprio dancing with Kate Winslet, just as we’ve seen the documentaries about the lost treasures that may or may not lie at the bottom of the North Atlantic.  We all know that the pride of the White Star Line sailed into an iceberg on her maiden voyage to New York; we all know that she carried only half the number of lifeboats she needed to accommodate all the passengers. We think we all know why it happened - the lookout saw the iceberg too late for the ship to avoid it.  What Dan James’ novel, ‘Unsinkable’, asks is - what if something else distracted that lookout’s attention?

The story begins in London. Special Branch policeman Arthur Beck survives two disastrous attempts to capture a gang of anarchists who have already committed cold-blooded murders in the capital. Beck’s fellow officers lie dead, shot by a notorious Latvian terrorist, Peter Piatkow. Recovered from his own physical injuries but racked with guilt, Beck returns to work only to make a wrong decision that costs more innocent lives.  Beck can take no more; he decides to leave the UK and start a new life in America.  He buys himself a first class ticket on the Titanic.

Martha Heaton, an American journalist, also boards the ship.  She has been sent by her paper to report on the rich and famous amongst the passengers, but she is desperate to prove herself a serious writer - she needs a big story to impress her editor.

James’ third character is Sten-Ake Gustafson, an old Swedish sailor travelling to the US to see his grandchildren before his cancer kills him.

Beck, Martha and Sten-Ake have little in common, but they are brought together when Beck spots a man who could be Piatkow boarding the ship at Cherbourg.  Martha wants the story; Beck wants Piatkow; Gustafson just wants a quiet life, but they will all be drawn into Piatkow’s attempts to escape justice.

Dan James has written a novel that manages seamlessly to combine fact and fiction.  The well-known details of the ship’s voyage - her departure from Southampton, the arrogant pride of her owners, the riches of the wealthy, the hope of the emigrants in steerage - are all here, but interspersed are little gems of information that bring the story to life - the Jesuit trainee priest who takes photos of the ship before he disembarks at Queenstown (Father Francis Browne’s photos provide some of the last surviving records of Titanic), the novelty of the Marconigrams that allow passengers to send messages to family and friends.  The characters of J Bruce Ismay, Managing Director of the White Star Line, and his captain, Edward Smith - the former self-confident and ultimately self-serving, the latter serious and hard working - are as well drawn as those of Martha and Beck - she reckless, determined, an independent woman making her way in a new age, he equally determined but past caring about his own survival, a man embittered by his past and the loss of his colleagues. James’ writing makes it as easy for us to identify with Martha’s joie de vivre as with Beck’s cynicism; we find ourselves rooting for both of them.

As the ship sails into dangerous waters, Gustafson, the old sailor, opens a porthole; experience tells him that ice is all around, so why is Titanic gaining speed?  Meanwhile Beck finally tracks Piatkow down - but will he be able to apprehend him?  It is late at night on 14th April 1912; Beck chases his prey onto the bridge.  What follows next may or may not have changed the course of history.

‘Unsinkable’ is an exciting, well-told, story that never drags.  James (the pseudonym of Dan Waddell) is an experienced journalist and writer, who knows how to keep us turning the pages.  He has done his research, and the details of life on board the most opulent liner in the world, and her disastrous end, are fascinating - but there are never too many; unlike some novels, Unsinkable avoids reading like a history lesson. The Houndsditch Murders and the Siege of Sidney Street did, of course, really happen, but I for one knew little about them before reading this novel.  The only thing I didn’t like about this book was the cover, which reminded my daughter of ‘20,000 Leagues Under The Sea’ and me of Jacques Cousteau.

An excellent read, and one that brings the events of that ‘night to remember’ alive for a new generation.

Reviewed by Rosemary Kaye
Posted by HelenMWalters at 15:46 No comments: