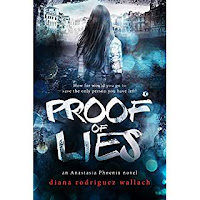 Proof of Lies by Diana Rodriguez Wallach is a completely awesome, exciting book. I received a free copy from Entangled Publishing via NetGalley in exchange for an honest review. Proof of Lies fits right in with one of my favorite topics to read about, in fiction and non-fiction, espionage and spies! Anastasia and her sister Keira are both in a "funk" even years after losing their parents to a car crash. Move after move. They move to new locations all over the world following their parents' work as engineers at Dresden. It has taken its toll on Anastasia. Each time she's been told this was home for a while so she has made friends and become involved in activities at her school in Boston. Then suddenly they are gone. She is left with Keira, who is just the age of adulthood herself, to finish raising her.  Anastasia is trying to keep herself going and Keira appears to be going off the rails with partying, drinking and bad boyfriend after boyfriend.

Proof of Lies is one of those books that resonates with the reader if they have a sibling, even if they are the older sibling who has been made responsible for a younger sibling even for five minutes. The resentment, arguing and sometimes ill-treatment of that sibling. Parents do not mean to have a hand in that relationship, but, sometimes they do because they cannot help but treat the children different. Maybe it is not because they like one better than the other, but, because the children are different with different needs and personalities. The parents also have personalities that just seem to mesh better with one child, not because they like the other one less, but, because they have things in common. Sometimes, just the age difference is enough for the siblings to not have as close of a relationship as they could.  Keira and Anastasia seem to have a pretty close relationship but that is put to the test with the loss of their parents. Keira’s disappearance makes Anastasia realize her part in how their relationship has turned. But, what is one of the best parts of this story is that Anastasia knows her limitations and despite all of them she uses the people and tools she must search for her sister. But, in the middle of understanding more about her relationship with Keira, she learns more about herself and her parents. Proof of Lies is the great start to an action-packed thriller with a great mystery and I look forward to the next book!

This Review was originally posted at  LadyTechie’s Book Musings.
Posted by HelenMWalters at 12:46