THEY SAY SUICIDE. SHE SAYS MURDER.

Mark Abbott is dead. His sister refuses to believe it was suicide, but only Detective Sergeant Geraldine Steel will listen.
When other members of Mark’s family disappear, Geraldine’s suspicions are confirmed.
Taking a risk, Geraldine finds herself confronted by an adversary deadlier than any she has faced before… Her boss Ian is close, but will he arrive in time to save her, or is this the end for Geraldine Steel?
Death Rope is a real treat for fans of Geraldine Steel and Ian Peterson, back together and working as a team again. Geraldine isn't entirely happy that these days Ian is the boss, but for readers the changed dynamic is really interesting.
This is an unusual murder enquiry that starts off looking like a suicide. But one person, the victim's sister, refuses to believe her brother would do such a thing. As Geraldine makes enquiries, at first tentatively, she starts to find that other people agree with that view. Could the victim's sister be right when she starts throwing accusations around about who might really be responsible for her brother's death?
If the victim didn't take his own life, then what did happen? Geraldine has to piece together the fragments including a shoe left outside a house, the mysterious involvement of a dog, a sinister black van, and the fact that people connected to the victim are also starting to go missing.
This is a complex plot with some very subtle touches, which leads to an unexpected conclusion. I don't want to say too much more than that for fear of giving something away, but it is very inventive.
As always we get glimpses into the detectives' private lives as well, adding another layer of interest to the proceedings. Geraldine's adoptive sister Celia has just had another baby and so she feels the pull to spend more time with family. But her loyalties are split between Celia and her birth sister. And what of Ian's estranged wife? Or does he have romantic intentions closer to home?
This series just gets better and better. You can read my reviews of Leigh Russell's earlier books here. 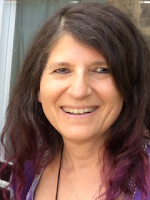 You can find out more here.
And buy a copy here.